PARIS — The students of Crestwood School gathered into the gym hoping for the guest speaker to crash on the floor.
Matt Wilhelm, a professional BMX Rider, came to talk to the elementary and junior high students and performed bike tricks for everyone to enjoy.
Taking the floor with jokes and energy, Wilhelm wove his own story into the program to offer lessons to the students while they are being entertained by his tricks.

For Wilhelm, biking and performing bike tricks was something that he has had a passion for since he was a kid, and he always dreamed of, not only participating in the X Games, but winning them.

After taking eight years to practice his skills, he finally got his shot at the X games with the cheering crowds, the TV cameras everywhere, and he ended up in last place after crashing four times.

The next year at the X Games, after being announced as last year’s last place finisher, Wilhelm had a perfect run and went on to win the X Games three times, the National title twice and more than 20 first place victories.

“I want you to remember to never give up. When you make a mistake or something is hard, don’t listen to the voices that say, ‘You’re not good enough.’ Listen to the one that says, ‘Never give up,’” Wilhelm said.

Despite the fact Wilhelm had experienced several crashes, every day in fact, and he had broken six bones, the thing that hurt him the most was when he was bullied. Even though being a biker or skater was not a cool thing when he was growing up, he was made fun of for his appearance, specifically about his ears.

Nicknamed “Ears,” Wilhelm recalled a time when a gang of bullies surrounded him at one of the dirt jumps AND pushed him around until they shoved him down the hill, and everyone laughed at Wilhelm’s expense.

“I needed somebody to save me, someone like Batman. That would be pretty awesome, right? He could fly in there and be like, ‘Hey! Leave him alone!’ Or maybe Spider-man would save me; he could wrap them up in a web and leave them hanging in a tree next to a bee hive,” Wilhelm said. “Or maybe, just maybe, a regular kid in the crowd would have the courage to speak up and go, ‘Hey! Leave him alone,’ just like Batman would have. But the truth is, nobody had the courage to speak up.
“That’s what hurt worse than breaking six bones. I needed one person to stand up and be the hero,” he said.
Along the same vein of this lesson, Wilhelm also talked about the power of words, and how saying, “Just kidding, man,” after saying something hurtful doesn’t take away the hurt that it caused.
“Choose your words wisely because I’ll be honest with you, when you say something nice, your words can make some feel valuable all around. When you say something mean, your words can tear them right apart,” Wilhelm said.

Wilhelm also encouraged the students to find their talent and practice it to make their dreams come true.
“If you want to get good at something, you have to work hard. You have something that makes you different, something that makes you stand out,” Wilhelm said.
Playing the saxophone since fifth grade, he was able to get a music scholarship to Millikin University, where he worked even harder at his studies than he did with this biking tricks.

“Be proud of who you are. Find your talent. Work hard. I hope you guys get the chance to go to college like I did. And who knows? Maybe I’ll vote for you on ‘America’s Got Talent,’” he said.

Wilhelm even had a couple of volunteers come to learn a trick: Shelby Clark and Colby Kindred. After putting a helmet on, Wilhelm had each student put one hand on the handlebars and the other on the seat. Their left foot was placed on one of the footrests at the wheel, and they used the right foot to spin the wheel so that the bike would move. Wilhelm held onto the bike for them, since this same trick took him two weeks to learn.
Some of the tricks that he performed included the Mega Spin, a trick Wilhelm is known for where he spins as quickly as possible on one wheel of his bike; the Upside-Down Wheelie, a trick that Wilhelm was the first person to accomplish in the X Games; the Hitchhiker, which took him four years to learn; the Time Machine, which made Wilhelm known as the fastest spinner on a bike; the Handstand, where Wilhelm lifted himself to be parallel with the floor while the bike moved; and the Spider-man, where he actually climbed a wall.

Oh, and he jumped over fifth-grade teacher Sara Pinnell, third-grade teacher Erin Waggoner and principal Danette Young.
Wilhelm has been traveling and performing these shows for 10 years, and he does about 300 shows a year. When he first started, he focused mostly on the tricks, but broadened the program to include encouraging messages for the students. And he gets his bookings by word-of-mouth with the principals offering him as a recommended speaker.

Wilhelm enjoys watching the children’s reactions to his tricks and hearing what they say to him, but he also likes the interactions he gets outside of the schools.

“Especially when you have a middle school group here, a lot of times the kids will find me on Instagram or comment on my fan page, and they’ll share their stories with me about what they are going through and how I’ve inspired them to overcome their challenges. Kids are going through some hard times sometimes. When you’re able to make a difference, to me, there’s nothing greater than making a difference in a kid’s life,” Wilhelm said.

Wilhelm’s performance was a Positive Behavior Interventions and Supports event and sponsored by Crestwood’s student council. 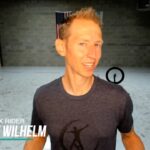 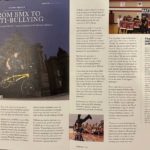 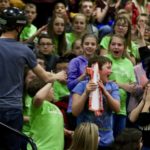 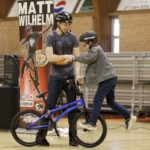 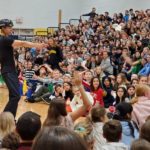