This message teaches Growth Mindset to kids in a way that they can understand.  All too often kids have already bought into the fixed mindset way of thinking.  They think they are either good at something or they are not.

We constantly hear kids say, “I can't do it.” However, little do they know the power of adding one word... “yet.” What they should be saying is “I can't do it, yet.” With hard work and practice anything is possible.

Matt will show your students just how little talent he started with by demonstrating the first few tricks he learned.  Then he will show how he used a Growth Mindset to invent signature tricks and ride at the highest level in the world. 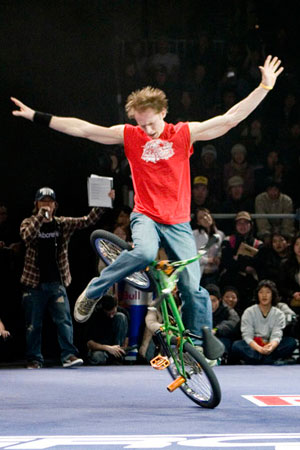 Riding at the Red Bull Circle of Balance in Tokyo, Japan.

At first glance it would appear that Matt Wilhelm is an “overnight success.” He won America's Got Talent YouTube competition propelling him straight into the live round of shows.

In one week he went from sitting on his couch watching the show to performing live on stage in front of 15-million people.

However, it took Matt many years of hard work and practice to get to that last “overnight.” He wasn't even the most talented rider among his friends.

By using a growth mindset Matt improved a little bit every day and eventually became a national champion.

Students can use a growth mindset to improve at anything, whether it be sports, music, arts, math, or even a spelling word.  Hard work beats talent when talent fails to work hard.

"Not only were your bike tricks awesome but your story was too. You showed us that just because you are different on the outside does not mean that people should be mean to you.
It means you're awesome in your own way and you should be proud of who you are.
Thanks for coming to my school. You were inspiring and I'm glad you came."

Watch a Preview of Matt's Show